After an election loss to a village idiot from Texas, the Democrats were quick to point fingers and Ralph Nader appeared in their crosshairs. His third-party presence was accused of siphoning off enough votes to require the conservative Supreme Court to decide.

Now, Karl Rove’s dirty deeds were a legitimate citation, considering the man had perfected the art of transmuting the outcome of elections. Surely, he made his mentor, Lee Atwater, former strategic consultant and tactical advisor for Reagan and Bush Sr (viz. Willie Horton), just as proud as a rotting corpse six feet under could possibly be.

Speaking of corpses, Al Gore’s body language was stiff and his persona pedagogic, in comparison to the loose and often amusing, dry-drunk antics of the court fool. Bush Jr. became Governor of Texas with the help of the Bush family henchman who most likely spread malicious rumors about the personal life of the much-beloved incumbent and nationally known Governor, Anne Richards.

To add insult to an injurious 2000 election, the Democrats chose the epitome of the neoliberal establishment and spokesman for AIPAC, Joe Lieberman, to be Al Gore’s running mate. Although I was impressed with Gore’s climate change concerns that became “An Inconvenient Truth”, the thought of voting for Joe Lieberman — someone who made my skin crawl otherwise — was a bridge too far.

So yes — blame me and my Nader vote, if you must, for Gore’s tragic loss, but said and done and 20 years later, Lieberman comes crawling out from under the woodwork on FOX News to proclaim that AOC must never be allowed to become the face of the Democratic Party — to which she replied via Twitter: “New party, who dis?” 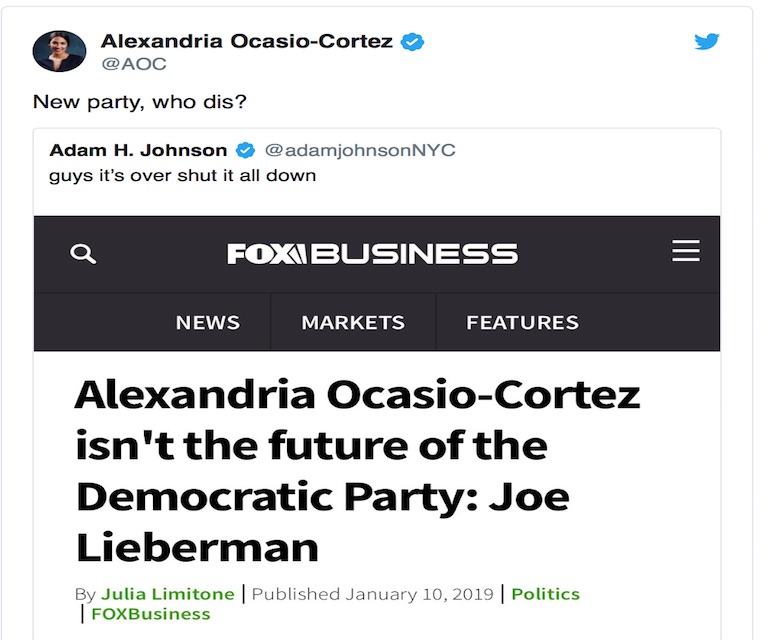 This wasn’t just a crusty old guard’s admonition in passing, but the continuation of the party’s intent to cast out the socialist elements from the neoliberal temple.

To anyone still in possession of their senses and who are duly disturbed by the ascendency of corporatism, the perpetuity of inequity, and the perverse austerity that follows in its wake — Alexandra Ocasio Cortez is a breath of fresh air and a candle in the darkness.  But to the status-quo mired, Bill Clinton designer party, her relative innocence and political purity only reminds establishment Democrats — when they look at their sold-out faces in the mirror — how far they have drifted from their populist purpose, in the shadow of FDR and the New Deal. So tethered to and so comfortable with their corporate sponsorship, they would rather kill the messenger, as they did in 2016, and put a “how ya’ gonna’ pay for it” muzzle on the Green New Deal.

May the inspiring young Brooklyn Congresswoman with the ruby red smile continue to stand tall and resist attempts to drag her down into the inefficacy of the “get along-go along” politics of the current Democratic Party. (jz)