While most that could be bothered were focusing on revelations of the DNC Wikileaks, such as HRC’s paid speech transcripts, the DNC violating its own fairness charter, and evidence of the DNC’s collusion with the media; there were a few things that remained overlooked. Among them was an email to Luis Miranda at the DNC, which reported the results of a poll asking 100,000 US high school students who they would vote for in 2016, if they could. This poll was conducted by two polling agencies: My College Options, and The Hispanic Heritage Foundation, acting under the umbrella of The Rabin Group, a consulting, problem-solving, and public affairs firm, refered to in other areas of the DNC leaks as “Democratic” (as opposed to “Republican”).

With this email are 6 attachments. Of these, 4 are PDF files which conclude the findings of the polls. The results, as many would predict, show a marked preference for Senator Bernie Sanders of Vermont. Millennials liked Bernie. That was no secret, but in an atmosphere filled with smear campaigns and disingenuity, why would they bother to tell the truth about millennials? The answer, as these results clearly show, is the degree to which young people preferred Bernie Sanders. The DNC knew they could never possibly hope to contain that.

…So they had to warp it…and warp it.

Yes, Bernie sanders was very popular among young people, but was it only because of a disproportionate number of male supporters? That was the gist of the idea that the ‘Bernie bro’ campaign sought to instill. But was that really true? This data would seem to show that it wasn’t, and that the DNC damn well knew it. 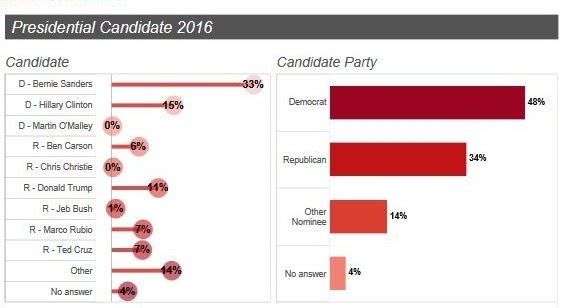 That’s only 4% more support for Hillary than for Donald Trump, and Bernie had more than twice the support among females that Clinton had. So much for ‘Bernie bros’.

We’ve seen one example already, let’s look at another one.

“African Americans prefer Hillary Clinton.” While that may have been the case overall, it certainly wasn’t the case with black millennials, and this data disproves every attempt to superimpose the larger truth onto the youngest voting block. 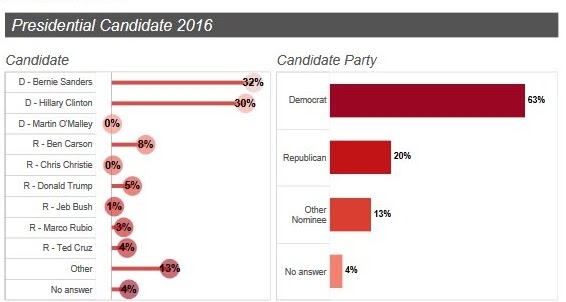 While there is still a large amount of support for Clinton in the target group, Bernie is still ahead. There were many who theorized that this was the case, but if only the results of these polls had been published, there would have been something in the way of hard data to support the fact that Sanders had not only a good amount of support in the young black community, but more than that, that his support actually eclipsed Clinton’s.

As you might suspect, that was yet another leak in their hull that they needed to patch. They needed to make young black voters (and future black voters) feel as though all of their peers were going to vote for Clinton, and therefore they should too, in order to close the gap for her. It was a pattern that continued over onto the Latino community, as well. I’m sure many can remember the articles trying to convince us that Latino youths were “with her”, but even the articles that foresaw a problem were way off from these figures. 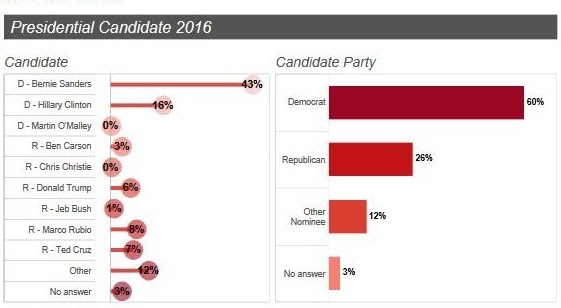 Meanwhile, the Millennial Latino voters were grouped, as their African American counterparts, with the whole of Latino voters. The Latino vote was heavily contested in MSM polls (predictably slanted though they were), and even when they acknowledged the support for Sanders, they never dared touch the actual scope of that support. Also, in similarity with millennials in general, there was no point in trying to hide the support of millennial Latinos. They had to try and downplay it by spinning it in their own direction, instead.

But the best has been saved for last.

This last polling group is comprised of all races and both genders, but only includes the age group eligible to vote in the 2016 election, and only those who intended to vote. But as you can see, the results went way beyond what we were led to believe about millennial support of Bernie Sanders. That’s not just “a marked preference”, it’s a landslide. It’s literally almost three times the support for Hillary Clinton. 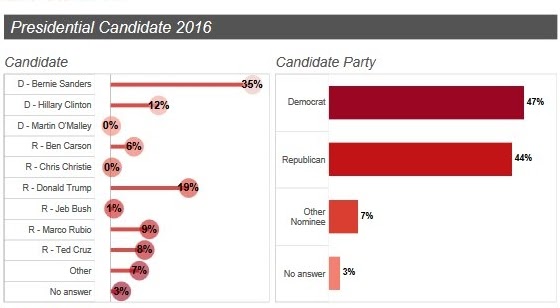 Now, imagine that the DNC was actually going to do their job, and actually isolate the strongest candidate to represent the Democratic party. Now Imagine that they got this information. What do you think they would do? Well if they were going to be impartial as their charter says they’re supposed to be, then they would rejoice in the fact that they had a candidate capable of producing such results. They would help him, endorse him, and back him. But instead, the DNC hid this information, so that they could perpetuate the myth that Hillary Clinton was the populist’s choice.

We’re all living with the outcome of that.

And even if these millennial polling results are seen as insignificant to the results of this last election, look at how they handled the data that we now know they had. Now consider how they could have applied that same standard of deliberate misinformation, manipulation, and outright fear-mongering propaganda to the rest of the voting block. If they did it for one, why would they not have done it for the other?

In the last three articles posted, notice that they all claim that millennials “would prefer a Democrat to Trump”, and then proceed to show similar results from two different very slanted, misleading polls, showing the results of the question “Who would you vote for, Hillary Clinton, or Donald Trump?” They wet themselves over the results, completely neglecting to show the results of a matchup between Sanders and Trump, let alone a comparison of the two contests. This magical matchup between Trump and Clinton had such power, that at times it was attributed to a total washout of all of Bernie’s support not just from white millennials, but from females, and all other races as well. The Harvard poll, used over and over again like a Bible at an exorcism, is an utter joke. Not only was the golden pairing of Hillary vs. Trump held up as the keystone, relegating Bernie Sanders to the status of a mere sideline, (“Oh by the way, Bernie Sanders was more popular, but LOOK HOW WELL HILLARY DOES AGAINST TRUMP”), but a false opposition is set up between Capitalism and Socialism. You had to pick only one to identify as.

Ask yourself this question: “What do these poll results remind me of?” Chances are good that you’ll be reminded of the plethora of online poll results from after the first Democratic primary debate, asking who had won. We all saw what the establishment press did with those. They were all dismissed as completely worthless, in spite of their almost universal similarity, because of issues related to internet polling in general. However, the scientifically conducted polling results from this secret study seem to back those up.

In spite of all of this, there will be people who will say: “But how important is the millennial vote anyway? What impact could they have had in the general election?” Who knows? But consider this… Hillary Clinton had very little support, and Bernie Sanders had three times as much among high school students…early in 2016, before wikileaks, Clinton Cash, guccifer 2.0, or Comey’s letter. As Bernie Sanders’ appeal grew, Clinton’s declined. If this was the level of support among HS students at that time, it could only have increased by the primaries.

Plus, this completely amazing showing of support for a Democratic Socialist candidate among the very young is encouraging.

No matter what’s happened in the last 2 years, and continues to happen right now today, these teenagers will be a force to be reckoned with tomorrow.