What began as civil resistance by one Sioux woman and her grandchildren in early April has since become an international movement to preserve clean drinking water, in the face of formidable violent opposition from a militarized police force and hired mercenaries.

An estimated 5,000-10,000 people have joined the ranks of Water Protectors in an attempt to stop the Dakota Access pipeline (DAPL) from running under the Missouri River at Lake Oahe, just north of the Standing Rock Sioux Reservation.

The original plan had been for the pipeline to run north of Bismarck, but local residents objected because they felt it would endanger their water supply. The pipeline was subsequently approved by the Army Corps of Engineers to be rerouted through tribal lands sacred to the Sioux, and which now endangers their drinking water and that of approximately 17 million Americans whose water stems from the Missouri River. Given there have been over 2,000 “significant accidents” involving pipelines since 1995, the concerns of the Sioux are not misplaced.

Joining the ranks of Water Protectors are members of Native American tribes from all over North America, regular Americans who have traveled from states as far away as Florida and Hawaii, and even people from other parts of the world. All these people recognize how crucial it is to protect our water from inevitable pipeline ruptures, to preserve the sacred lands of Native Americans, and to stop developing further infrastructure for fossil fuels at a time when we should be shutting down fossil fuel operations in favor of clean energy. The way these Water Protectors are being treated by law enforcement is criminal.

For weeks, these peaceful, unarmed resisters have been attacked by law enforcement-backed security contractors in military assault gear while at prayer; they have been dragged out of sweat lodges during sacred ceremonies; and they have been assaulted by rubber bullets, concussion grenades, sound cannons, pepper spray, tear gas, water cannons and attack dogs by doing nothing more threatening than standing together to block pipeline construction. Those who were arrested have had numbers written on their arm in marker and have then been thrown into chain-link holding cells the equivalent of dog kennels. Photos from Standing Rock look more like Iraq or Syria than North Dakota. This is domestic terrorism, plain and simple.

According to the Standing Rock Medic & Healer Council, on the evening of November 20, approximately 300 people were injured, 26 of whom were hospitalized due to deadly attacks by police. The water protectors had been attempting to remove burnt-out military vehicles that had been blocking the Backwater Bridge since late October. This obstacle, placed between the Oceti Sakowin camp and pipeline construction sites further down Highway 1806, had been keeping emergency medical services from getting through from Bismarck, endangering those in the camp who might need medical assistance.

The police assaulted the Water Protectors with high-pressure water hoses for 7 hours in 22-degree temperatures, causing widespread hypothermia. Linda Black Elk of the Standing Rock Medic and Healer Council described “people walking through the dark of a winter North Dakota night, some of them so cold, and sprayed with water for so long, that their clothes were frozen to their body and crunching as they walked.” 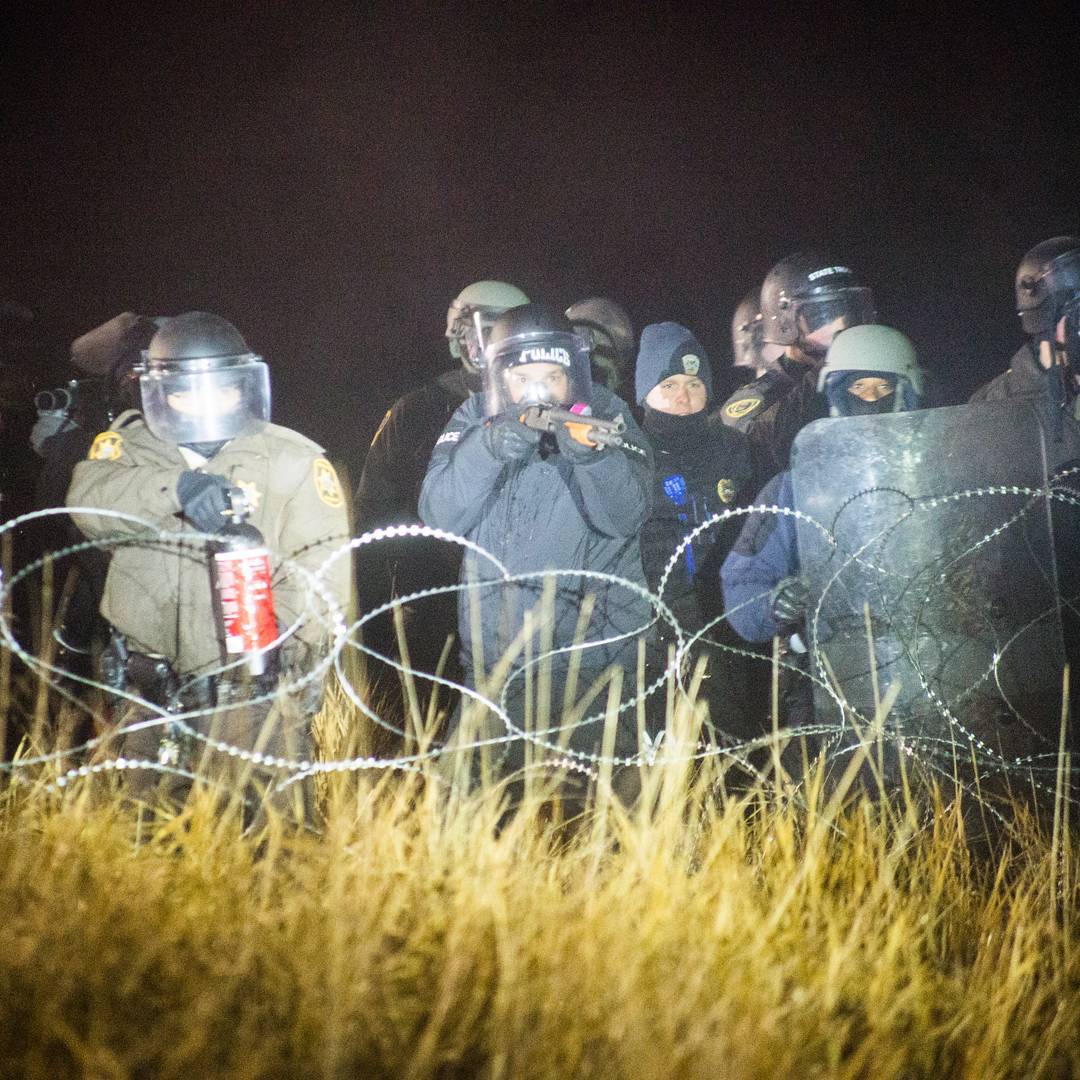 The Morton County Sheriff’s Department not only caused hypothermia for hundreds of people, while they were spraying people continuously for 7 hours, they made no attempt to use that hose to put out a significant fire in the brush next to the bridge that had been started by one of the police concussion grenades. The water protectors had to scramble to put it out themselves as best they could while their compatriots were being drenched.

The only appropriate term for these militarized police actions is “domestic terrorism.” Not only are these acts just as deadly as any terrorist act committed by foreign agents, they are worse because they are being committed by Americans against their fellow Americans.

In addition to the chemical weapons, these domestic terrorists also fired “non-lethal” projectiles that caused blunt force trauma that caused head wounds, lacerations, and internal bleeding. One Water Protector, Sophia Wilansky, a 21-year-old woman from New York, was hit in the arm by a concussion grenade while bringing water to the other Water Protectors. If she is lucky, she may one day regain 10% use of her arm. Doctors are still not certain it will not require amputation.

Wilansky’s father, Wayne, said police were intentionally aiming for faces and groins. “It’s outrageous that this happens in this country. I’m only afraid that things are going to get worse.” He reported that his daughter told him “The police are trying to hurt people. They’re not trying to control the situation, they’re not trying to arrest people, they’re trying to hurt people intentionally, purposefully.” He continued, “Someone could die easily. They’re shooting people in the head. Someone will die if something isn’t done.”

According to an article in The Daily Beast, a young native man from the Ojibwe nation reported “being openly targeted by a police officer using ‘non-lethal’ weapons to cause serious harm. ‘He shot me with a rubber bullet right in the belly button, and when I showed him that he had hurt me, he just smiled and shot both my kneecaps,’ he said.”

This use of excessive force is criminal when used against peaceful, unarmed protestors who are poorly equipped to face the deadly force coming from law enforcement-backed security contractors equipped with battle gear. Of course to call this “law enforcement” is a joke. They are not enforcing any laws. Far from it. In fact, they are breaking laws and violating Americans’ constitutional rights. They are protecting the profits of private energy companies. Why are our politicians not speaking out against these atrocities?

If these despicable acts of lethal force had been committed by foreigners, you can bet the Obama administration’s response would be swift and strong. However, not a peep has been heard from the Obama administration, despite the attempted murder of hundreds of Americans by a private entity. Before the election, Obama’s only input on the matter was that he wanted to wait and “let it play out for several more weeks” to see if the situation can be resolved. Meanwhile, Water Protectors are being subjected to attempted murder by the police. His response and that of our government is nothing short of shameful.

Of course, it’s easier for Obama to wait until Trump takes office so he doesn’t have to admit to the fossil fuel companies who funded his campaigns that he failed them. And we all know with Trump’s considerable investments of up to $2 million in both Philips 66 and Energy Transfer Partners, he will certainly never step in to stop pipeline construction.

Military veterans are organizing to gather on December 4 at Standing Rock to join in peacefully protecting the water and the Water Protectors from the government and the corporations behind the violent police interventions.

Veterans for Standing Rock have proclaimed “We are veterans of the United States Armed Forces, including the U.S. Army, United States Marine Corps, U.S. Navy, U.S. Air Force and U.S. Coast Guard and we are calling for our fellow veterans to assemble as a peaceful, unarmed militia at the Standing Rock Indian Reservation on Dec 4-7 and defend the water protectors from assault and intimidation at the hands of the militarized police force and DAPL security.”

Michael A. Wood Jr., a Marine Corps veteran and former Baltimore police officer, one of the two founders of Veterans for Standing Rock said “This country is repressing our people,” Wood Jr. says. “If we’re going to be heroes, if we’re really going to be those veterans that this country praises, well, then we need to do the things that we actually said we’re going to do when we took the oath to defend the Constitution from enemies foreign and domestic.”

Wes Clark, Jr., the other founder of the organization, added “We’re not going out there to get in a fight with anyone. “They can feel free to beat us up, but we’re 100% nonviolence.”

According to Dave Archambault II, the Standing Rock Sioux Tribe’s chairman, on November 25, the day after Thanksgiving, in which Americans have traditionally celebrated the peace and friendship between Native Americans and the immigrant Europeans, the tribe was notified by the Army Corps of Engineers (ACE) that on December 5 they will close all lands north of the Cannonball River, which is where the Oceti Sakowin camp is located. The ACE claims they are closing the camp due to “safety concerns,” although given how they are allowing mercenaries to continue the attempted murder of Water Protectors on a daily basis, their concern seems rather disingenuous.

Archambault said, “Our Tribe is deeply disappointed in this decision by the United States, but our resolve to protect our water is stronger than ever. We ask that all everyone who can appeal to President Obama and the Army Corps of Engineers to consider the future of our people and rescind all permits and deny the easement to cross the Missouri River just north of our Reservation and straight through our treaty lands. When Dakota Access Pipeline chose this route, they did not consider our strong opposition. Our concerns were clearly articulated directly to them in a meeting on Sept. 30, 2014. We have released that audio recording from our council meeting where DAPL and the ND Public Service Commission came to us with this route.”

Chase Iron Eyes, a member of the Standing Rock Sioux, said “When we say the indian wars never ended, we are not engaging in hyperbole. There has been a deliberate economic, political, legal, and social media effort to oppress tribal nations and to expropriate from US citizens their civil rights, their constitutional rights, and their human rights. We can see it happening. Those of you who are getting woke and staying woke can see it happening.”

Describing Trump’s election along with a Republican congress, Iron eyes said “That basically describes the patriarchy that has proliferated around the globe, that is currently not only oppressing tribal nations and trying to shove a pipeline down our throat, but everybody who doesn’t fit that demographic, everybody who is considered an immigrant in their own hemisphere, in their own homelands. Everybody who faces a registry just because of the faith that they follow. This is what’s happening right now in America. So we need to be strong we need to stick together. We need your help, and we’ll be there for you when you face this struggle.”

One important way you can help support Standing Rock is to put pressure on those  financial institutions that are funding the pipeline by pulling any investments and accounts you have with those institutions and switching to banking with a credit union. Be sure to let the bank know why you are leaving them so they are made aware that their actions have consequences.

We also should be demanding immediate investment into infrastructure in support of clean, renewable energy technology, while calling for divesting ourselves from fossil fuels. There is no reason the United States can’t fully meet its energy needs from renewables, apart from big oil complaining it will take a bite out of their profits. Smart investors can see the writing on the wall and will invest in renewables rather than sticking with a dying fossil fuel industry.

What is happening in Standing Rock should not be happening in America. If we allow this police brutality to continue, what kind of nation can we call ourselves? How can we be an example to other countries when human rights are being trampled on a daily basis and our own citizens are being treated like enemies? We must all stand together to support Standing Rock and to let those in power know that domestic terrorism will not be allowed, even if it is in the guise of law enforcement.